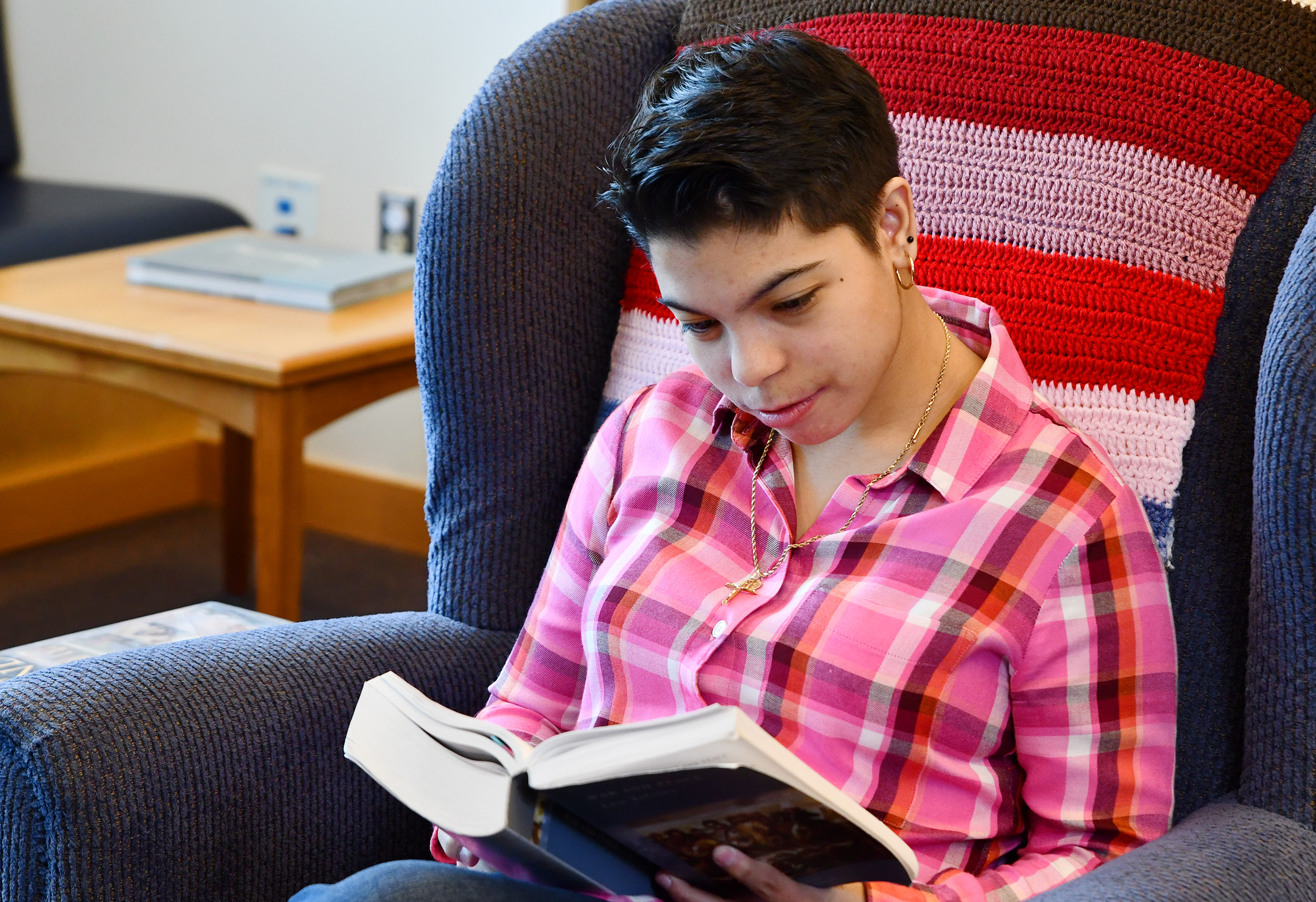 Noah reads War and Peace, one of her favorite novels

The idea of experimental treatments can seem daunting, but for Noah and her mother, Gisela, the trips to the NIH and The Children’s Inn were always welcome. “My mom and I call it our little vacation even though it’s not a vacation,” she laughed. “Staying there makes it feel like we are on a vacation. Because we’re in a safe space and I feel like I don’t have to explain myself. Everyone is welcome.”

Raised as a Roman Catholic, that belief in a higher power and a desire to find her way to give back to the world was integral in shaping Noah. She knew that even with her condition, there was something that she could do to make a difference. Then, at the age of 14, she found it. She began writing poems, and the inspiration flowed out of her and onto the page seemingly without end.

“Once I realized that, poetry became a huge outlet for me,” she recalled. “It’s really the only thing that God gave me to keep me sane in this sort of situation.”

Two years ago, that mindset was tested even further as Noah, along with the rest of the world, was faced with the onset of the COVID-19 pandemic. Suddenly, after a life of having to explain herself and feeling like an outcast, she found herself in position to be questioning the difficulties of others surrounding her.

“At first, I had an arrogant attitude towards it,” Noah remembered of those early days in lockdown. “I didn’t go out a lot before the pandemic. Not like other young people. So I felt like ‘I got this.’ I was used to this sort of situation and while everyone else was freaking out, I was thinking ‘Welcome to my world.’ But as time passed, I thought that maybe I’m not handling this situation as great as I thought.” 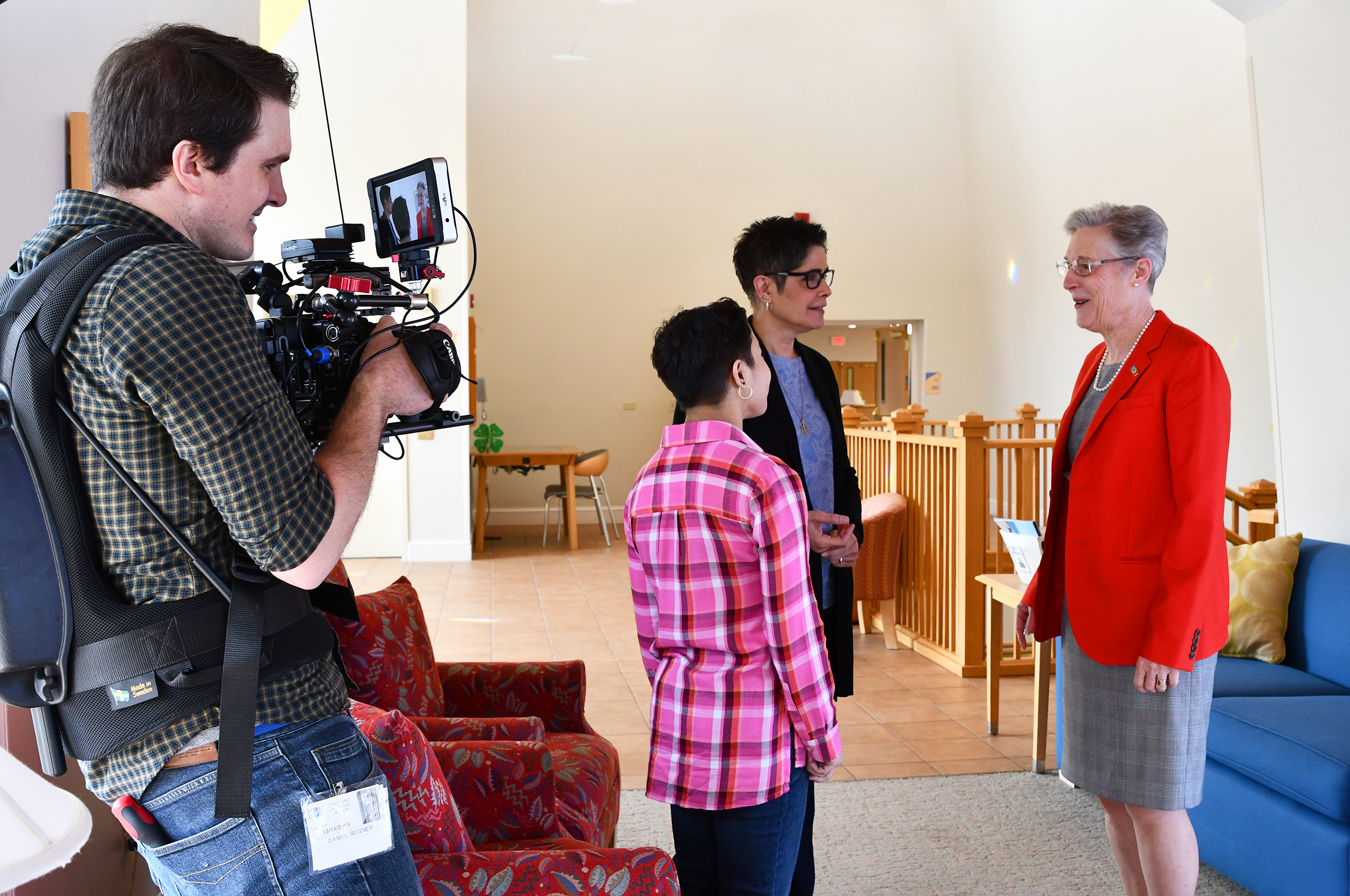 Behind the scenes: Noah, Gisela and Dr. Tifft are filmed by our crew

Throughout, she has turned to her poetry to keep her both grounded and connected with the world around her. During the pandemic, she was able to connect virtually with a professor at a nearby college, Dr. Michael Glaser, who served as the Poet Laureate of Maryland from 2004 to 2009. Together, they are working to publish Noah’s first book of poetry.

“I didn’t know what I was going to do with [my poems],” she said. “He has been a wonderful mentor for me in writing my poetry and in life itself.”

The book, which she anticipates being published around December 2022, will feature artwork from her mother and uncle. And it has a title – Right What Wrong May Be.

“It’s something that my abuela, my grandmother, used to say,” Noah explained. “It’s actually a prayer – “Holy Spirit, right what wrong may be,” – but I just used that part of it. And it’s basically just me trying to achieve my dreams even in this chaotic situation dealing with a chronic illness and rare disease. This is me trying to figure out how to make right of what the situation that was given to both me and my parents.” 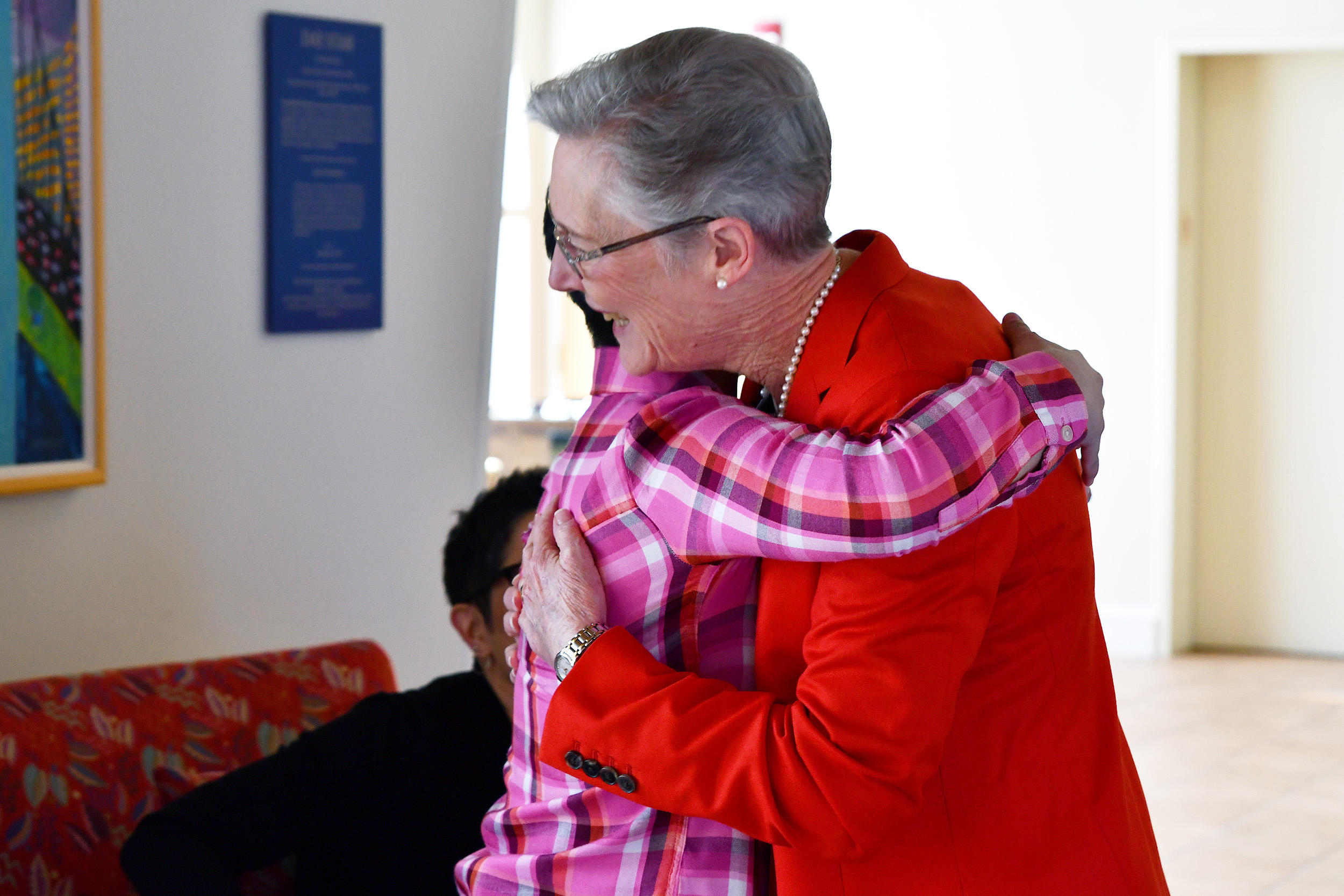 Though she has good days and bad along her continuing medical journey, Noah has not been able to return to The Inn over the last two years as a result of the COVID-19 pandemic. Nevertheless, she still credits it with giving her the confidence and freedom to be herself and discover her purpose. It also helped instill in her a sense of empathy that helped her overcome those early feelings of arrogance, a sense that she hopes will be instilled in us all as the world emerges from the pandemic.

“I hope that people are more aware of everyone else’s struggles,” she said. “With anything, not just chronic illnesses. Just really come together and listen and hear what people have to say and try to be as empathetic as they can.”

And soon, she hopes, she will be able to return to The Inn.

“It’s a very homey place,” Noah remembered. “The two years without it has been difficult, and I’m looking forward to coming back to it.”