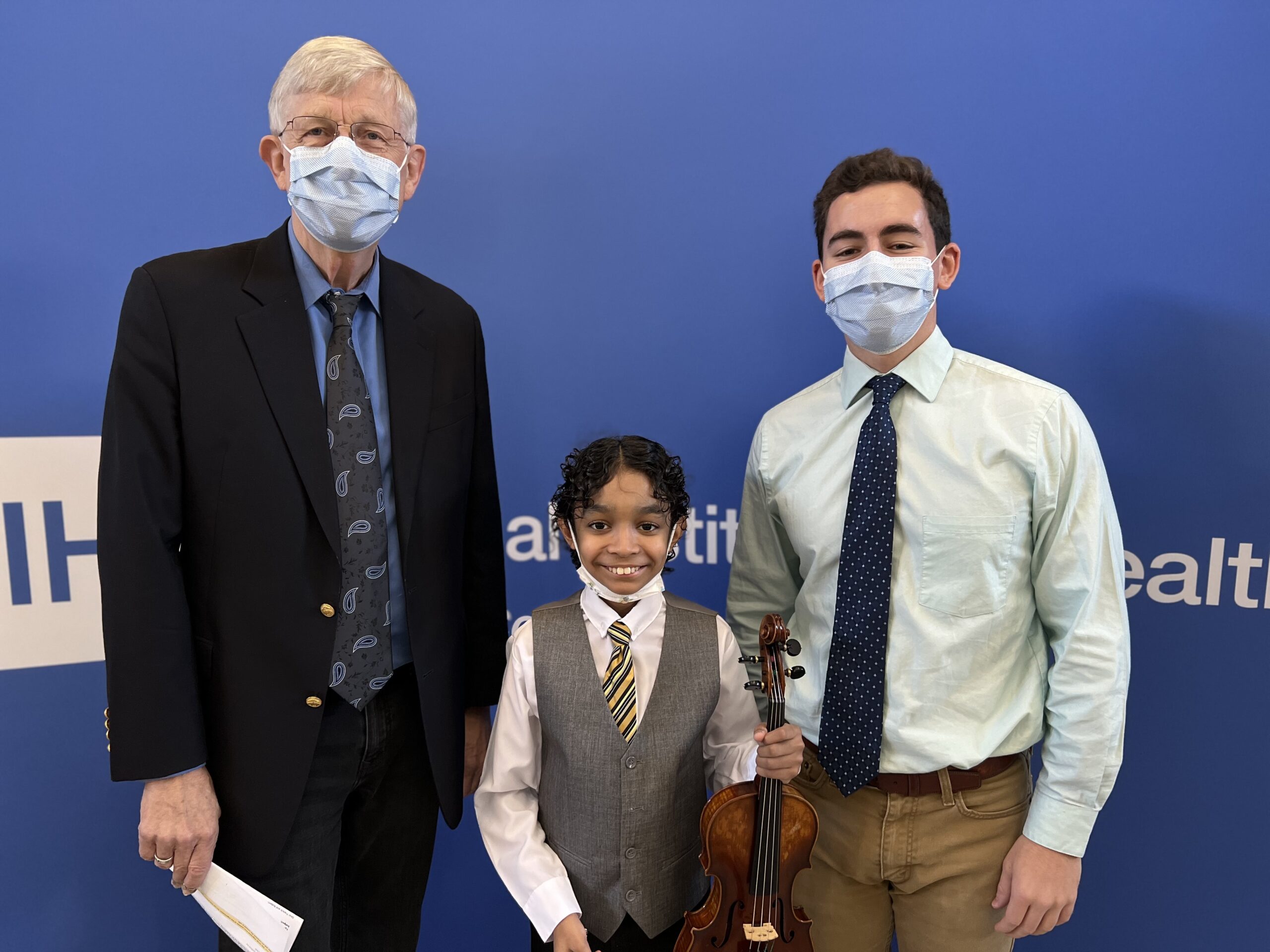 Music has the power to say more than any spoken language. On the Monday of Thanksgiving week in the atrium of the Clinical Center at the National Institutes of Health, a 14-year old boy used music to find a memorable way to say thank you. And he intends to do it every year at the place that gave him back his life.

A year ago, Caesar Sant was staying at The Children’s Inn as he recovered from a life-saving bone marrow transplant provided by his younger sister. Caesar was born with sickle cell anemia, a red blood cell disorder that affects hemoglobin, the protein that carries oxygen through the body. The successful transplant was the culmination of a lifetime searching for a cure, a lifetime marred by pain and multiple strokes but enriched when he discovered a love of – and talent for – music. You can read Caesar’s story – how he refused to let his life be defined by his diagnosis and became a precocious violin prodigy by the time he turned four – here.

Caesar is now disease-free. The transplant was a success, and his cells are all perfectly healthy. He still walks with a limp and is engaged in ongoing physical therapy that will help correct that, but the transplant gave him a new lease on life and left him with what seems like a permanent smile.

Since his transplant, his music has taken center stage under some of the brightest lights in the United States. In May, The Children’s Inn hosted An Evening For Hope, its annual gala to support the mission of The Inn to provide “a place like home” to children, teens, and young adults with rare and serious diseases whose best hope for a diagnosis or treatment is an NIH clinical research study. The star of the show was Caesar, performing for more than 400 people in attendance and earning multiple standing ovations.

In October, Caesar found himself on stage at the Kennedy Center in Washington, D.C., one of the most prestigious performing venues in the United States. He took part in an event called NSO Sound Health, a National Symphony Orchestra initiative that focuses on the intersection of music and wellness. 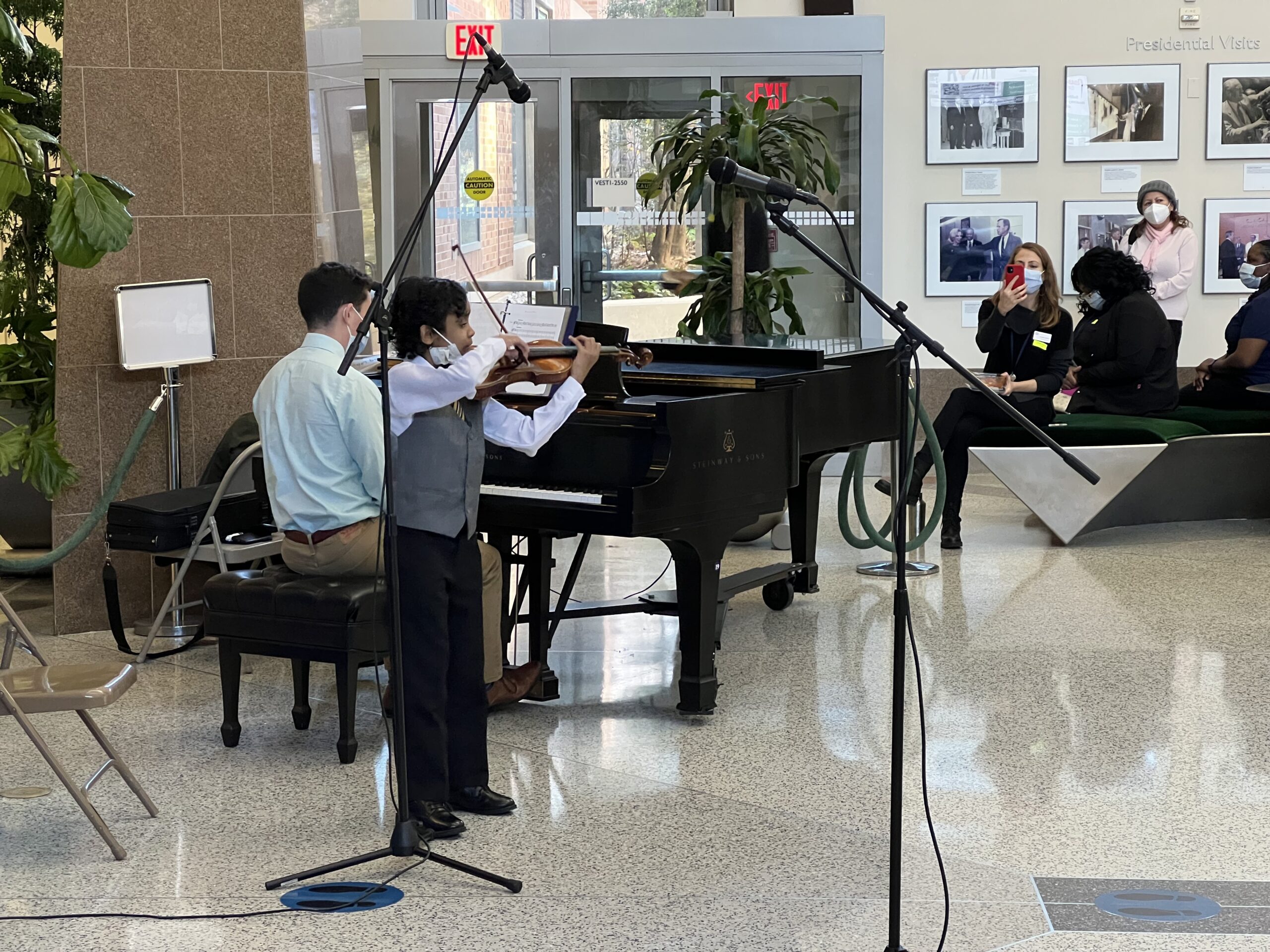 The lights were not quite so bright on Monday in the atrium of the NIH Clinical Center, but to Caesar and his family, it was the most meaningful show he had performed since his transplant. Caesar, accompanied by post-baccalaureate fellow Robert Masi on piano and former director of the NIH Dr. Francis Collins on guitar, played five selections ranging from Bach and Beethoven to John Williams.

A crowd gathered, some unaware of the performance until they were walking through on their way in or out of the massive building. All of them, though, were captivated by Caesar’s presence and his performance. For him, this was a way of saying “thank you” to the people and the place that had saved his life, and he viewed it as the start of a tradition.

“Every Thanksgiving week, we will be right here,” said Caesar’s father Lucas. He and Caesar made the trip down from Rhode Island, as they had done so often for stays at The Children’s Inn and treatments at the Clinical Center. “It’s easy to say thank you.” Maybe so, but Caesar’s unforgettable performance was a long time and a lot of hard work in the making. 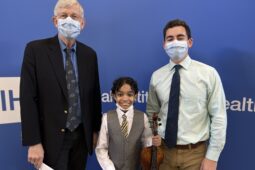 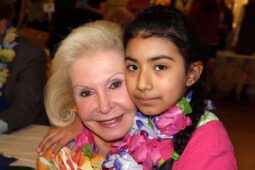