When children and families at The Children’s Inn at NIH have a hair emergency or need some love and pampering, they have a friend to call. For several years, Progressions salon spa store in North Bethesda, Maryland, has been standing by to provide on-the-spot hair and beauty services when needed most.

After undergoing chemotherapy treatments to prepare for a lifesaving bone marrow transplant, Children’s Inn resident Parys, 14 at the time, began losing her long, blond locks in chunks. Children’s Inn staff reached out to our friends at Progressions to provide the teen with a rocking transition hair style. Parys is one of many Children’s Inn residents the top-rated and award-winning salon has helped through especially difficult health situations with pro-bono beauty services.

“Oh, my gosh, they were a Godsend,” Parys’ mom, Jeannie, says about Progressions. “Losing her hair was the biggest deal for Parys. I finally let the folks at the Children’s Inn front desk know, and they said, ‘We have someone who will come here if she wants to get it cut.’ And they came; they made her comfortable. They wouldn’t take money. They were just awesome. I cannot even tell you – she was so excited and so happy; it was amazing.”

The stylish cut helped Parys come to terms with losing her hair. Parys’ twin brother also did what he could to show his support. After growing his hair out, he had Progressions cut it to match Parys’ look. He donated his hair so it could be turned to a wig for a child or teen like Parys.

A stylist at Progressions helped Parys learn how to style and care for her blond wig, which resembled her own, natural hair. 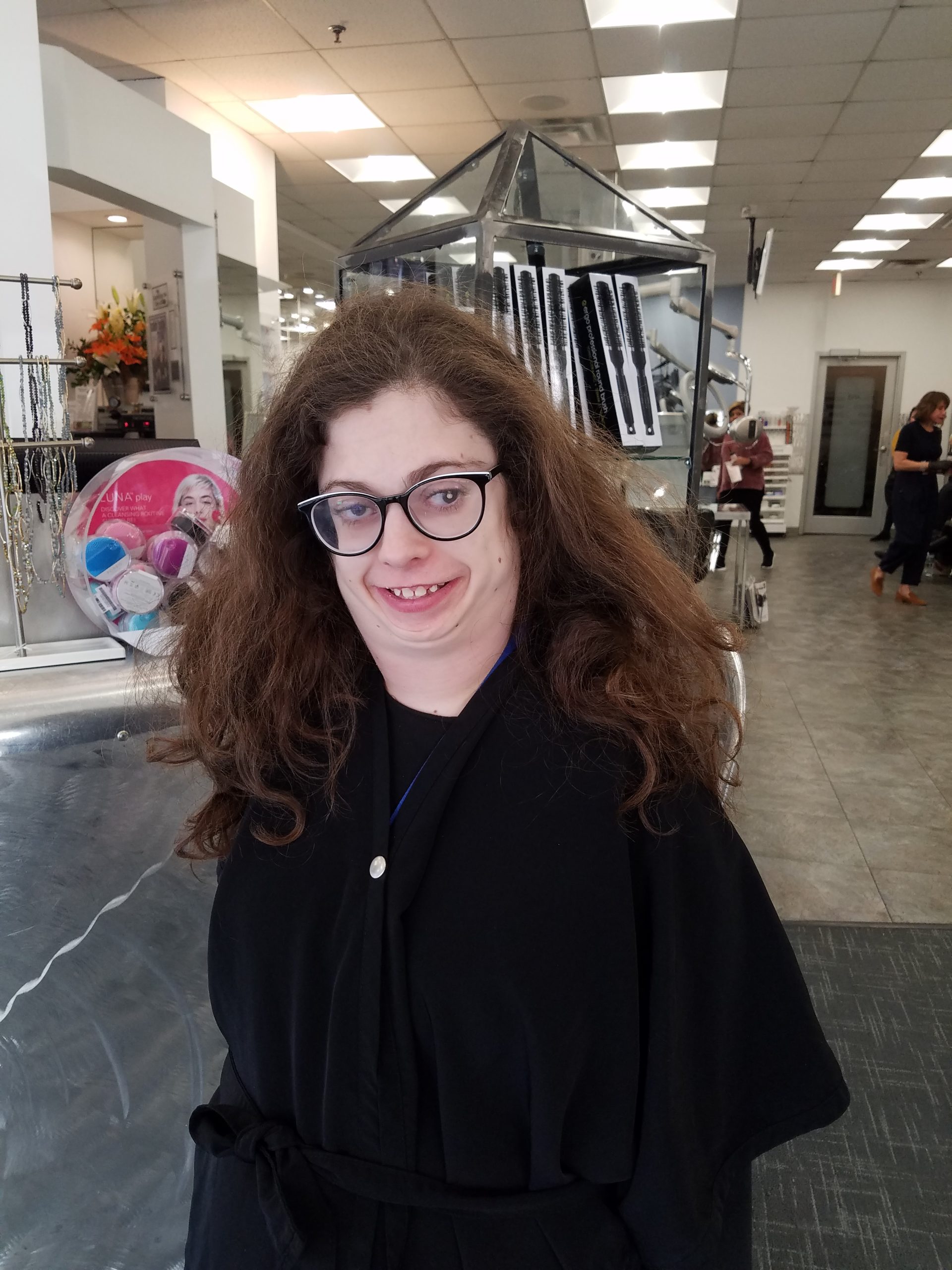 “Hair is such a big piece of your personality and what makes you, you,” Jeannie says. “Wearing and caring for a wig is something you have to learn. You have to clean it and wash it and use certain products, and comb it, put it on a stand. Progressions helped her out and fixed her wig a couple of times so she felt good about wearing it.”

“One of our favorite things is to give back,” says Laura Verdi, Progressions’ human resources director. “Our business cards say ‘Daymaker.’ We’re an empathetic group of people. We want for the children and families at The Inn to feel cared for and nurtured while they are going through a very difficult time.”

Progressions also has helped brighten stressed-out parents’ long and difficult days by providing them with spiffy styles or crisp color.

Recently, Children’s Inn resident Aviva, 20, and her mom received free haircuts thanks to Progressions Stylists Rachel and Evelyn that made both of them proud.

“Thank you so much to Progressions,” Aviva’s mom says. “You saw the beauty in Aviva and made her feel beautiful again. What a fabulous haircut and fabulous people. We are truly blessed to have people in the world like you!” 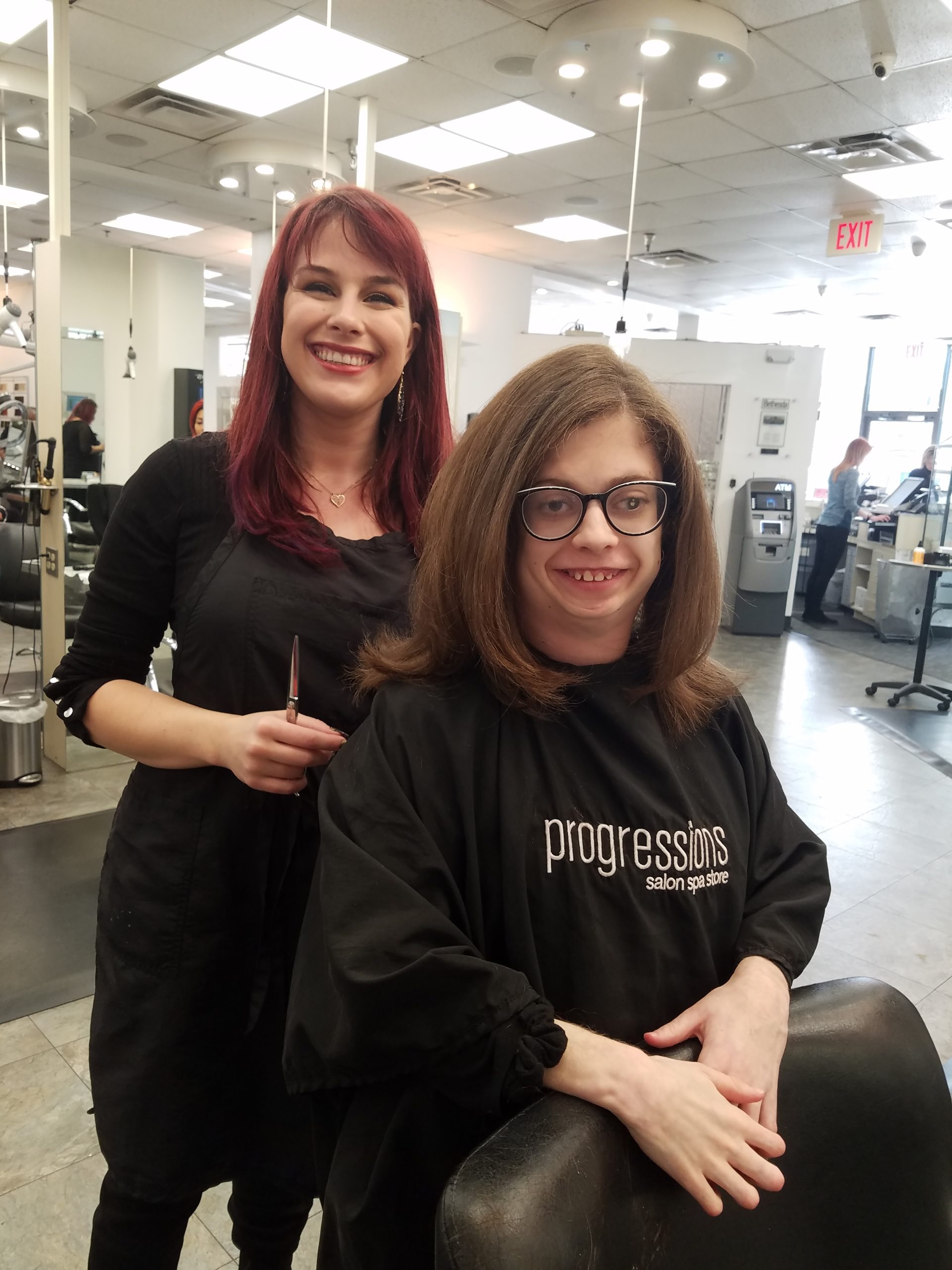 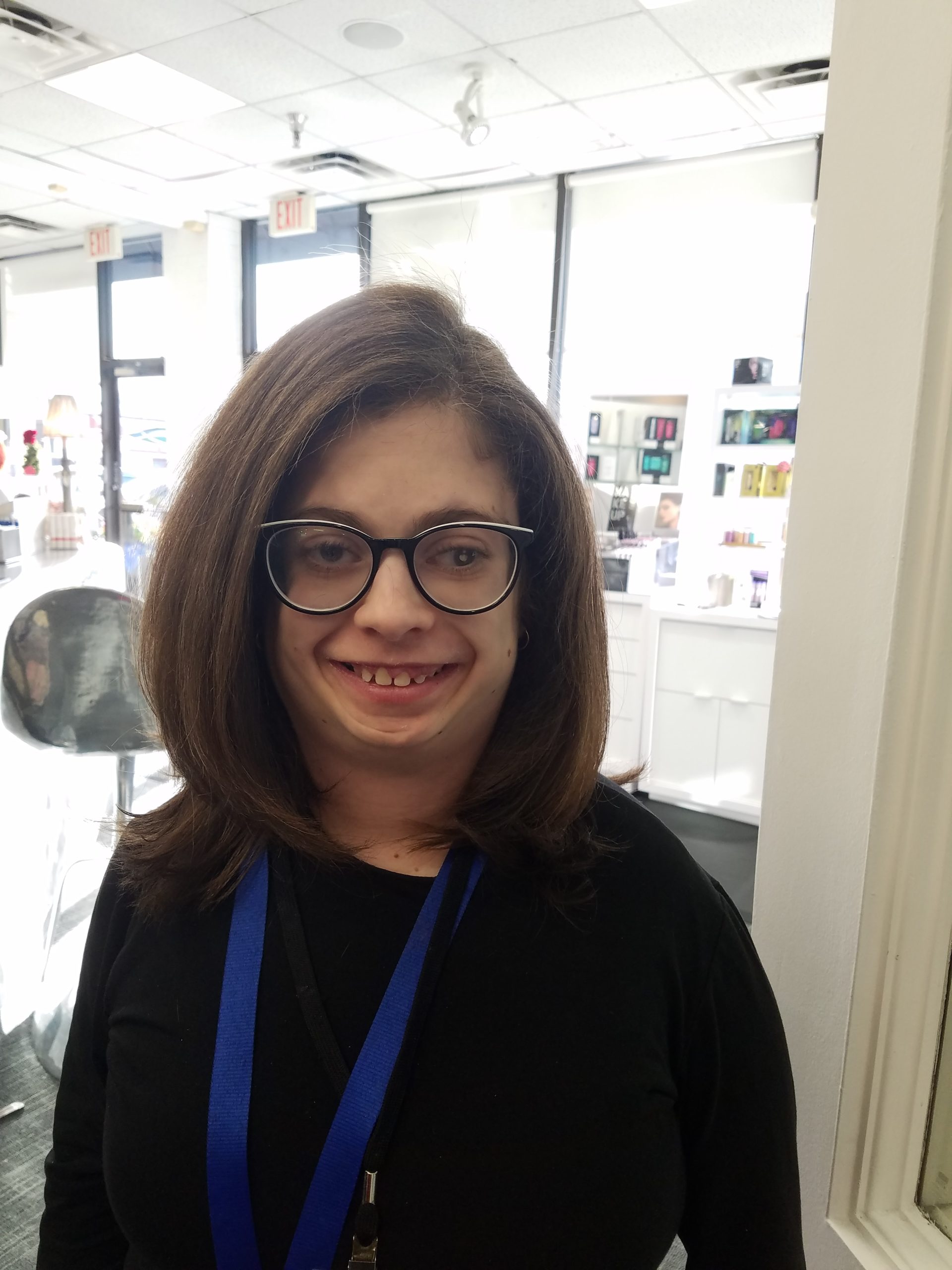 To a mom whose son has spent nearly an entire year at the NIH Clinical Center, Progressions’ services gave her the chance to relax and take some much-needed time for self-care.

“It’s an amazing service,” says Aisha Dubose, associate director of program and services, The Children’s Inn. “Children and family members can get their hair washed, cut, colored and dried. It’s one of these extra things that makes families feel really good when they’re stressed and going through so much already. We greatly appreciate our partnership with Progressions and their big heart for our families and their children.”

Progressions owner Cindy Feldman has made giving back to the community one of the pillars of her salon’s mission statement. This commitment to give back made Progressions reach out to The Children’s Inn at NIH several years ago to provide free hair and beauty services to one Children’s Inn resident a month. Verdi, who has worked at Progressions for close to 30 years, says the salon’s and its staff’s commitment to the children and families at The Inn stem from their close relationship with the NIH.

“I grew up in Bethesda and live about a mile from the campus,” she recounts her personal relationship with the NIH. “I have volunteered for medical trials at NIH; my mom has volunteered at NIH. When I was growing up, we would go to the NIH and Walter Reed National Military Medical Center – the campuses were open to the public at the time. I remember having great respect and admiration for the medical field. The NIH is an awesome facility to live near and contribute to and learn from.”

Progressions has been voted best salon for several years in a row by readers of Bethesda Magazine and designated one of the top 200 salons in the United States by Salon Today, among other accolades. For more information, visit https://progressions.com/.