Alison wants you to know that she is doing well, and it is all thanks to you. The 21-year-old from El Salvador faced down two potentially-fatal diseases during two lengthy stays at The Children’s Inn, and is now rebuilding her strength at home in El Salvador.

Back in 2015, Alison got an infection on her lip thanks to a scrape from her braces. Her father brought her to the emergency room, where she underwent some standard lab work and was sent on her way with topical cream. 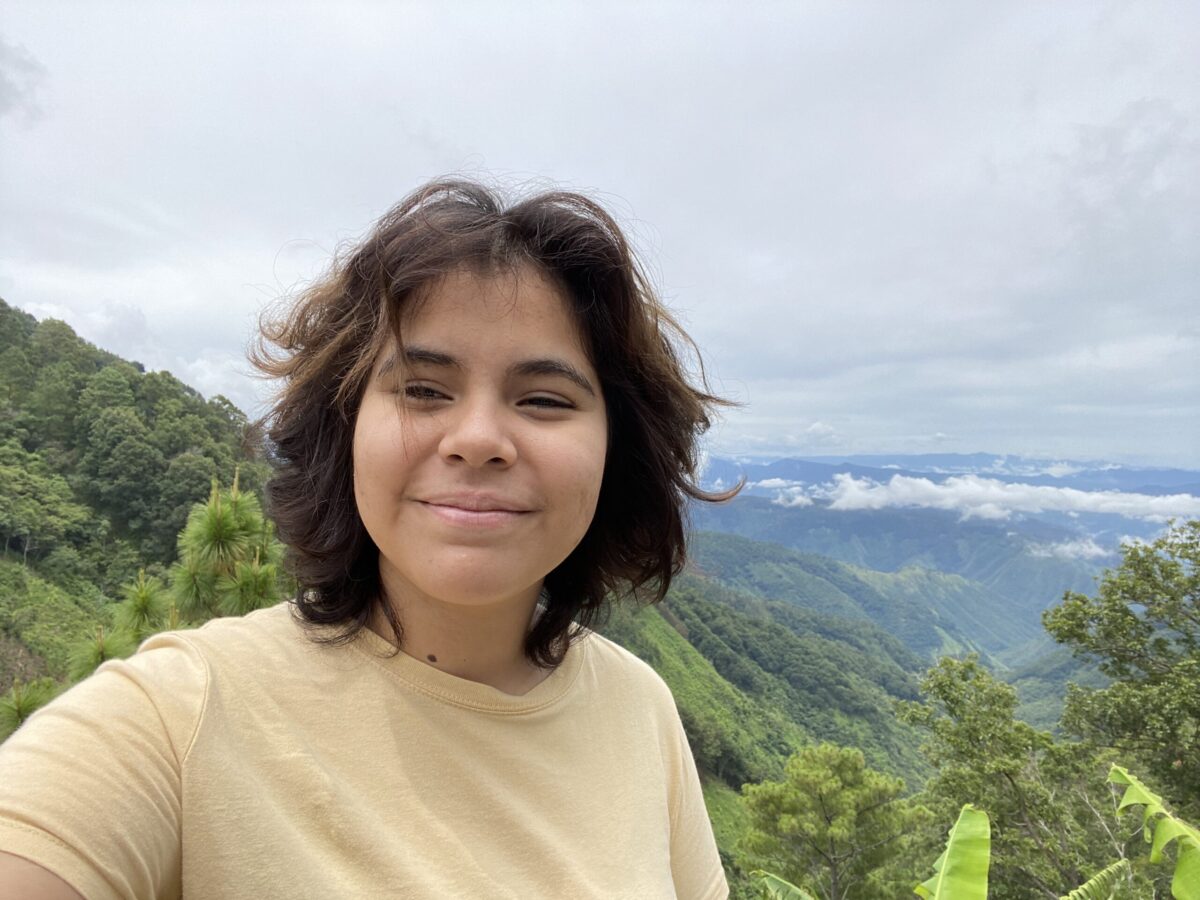 Alison on a hike in El Salvador

But the lab work was alarming, and less than half an hour after they arrived home, her father got a phone call summoning them back to the hospital. A painful bone marrow biopsy revealed Alison had severe aplastic anemia, or bone marrow failure, a potentially fatal blood disorder.

Alison would spend the next six months in the hospital, getting blood transfusions to keep her alive but unable to receive the long-term treatment she would need because the serum treatment and bone marrow transplant she would require was not available in El Salvador.

“I didn’t believe I’d leave the hospital alive,” she remembered.

After extensive research, Alison’s family reached out to the NIH and discovered that they had a trial that would work perfectly. Only days later, she arrived at The Children’s Inn at NIH to join a clinical trial conducted by the National Heart, Lung and Blood Institute. After many months of trying medications, Alison’s bone marrow finally began producing blood again.

A year-and-a-half after arriving at The Inn, Alison returned home. She returned for regular checkups at the NIH Clinical Center, though, and in 2019, one of those checkups showed that her blood counts had plummeted again. This time, she was diagnosed with an aggressive form of leukemia caused by her underlying blood disorder.

Fortunately, a bone marrow donor had been found, and she underwent the grueling bone marrow transplant in the hopes of a cure.

Six months after her transplant, having been so weak that she had to relearn to walk and eat, she was ready to go home. But just as she was ready to depart, the COVID-19 pandemic struck and kept her from being able to leave the NIH campus.

Unable to leave campus, Alison asked The Inn team if there was a tent she could borrow. One was quickly procured, and she set up camp on the playground. She used the tent as a personal space to read, journal, reflect, listen to music, watch the stars, and observe the NIH campus deer herd from up close. 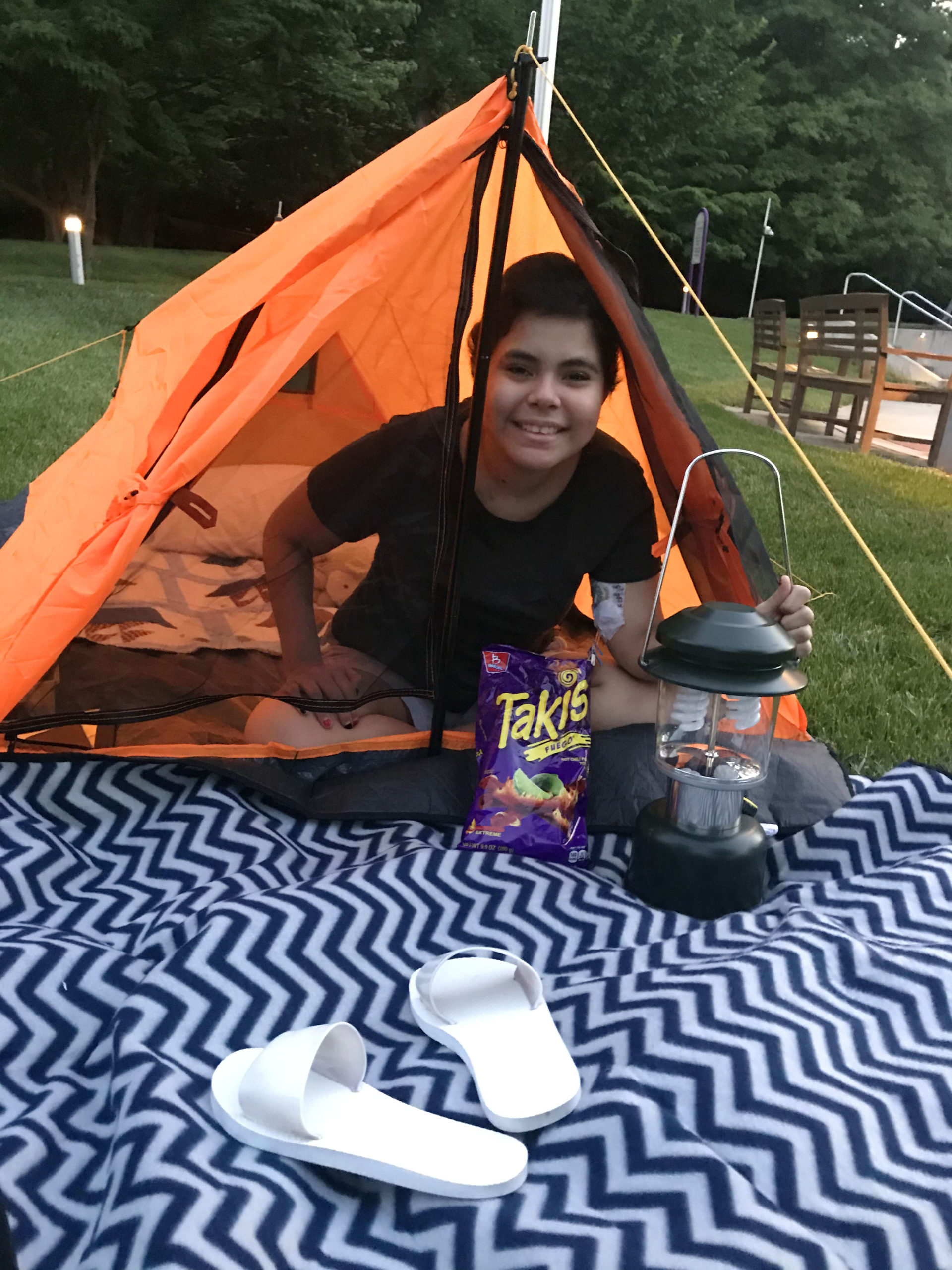 Alison in her tent on The Inn playground

Though it extended her time away from home, COVID-19 was just another obstacle to overcome on Alison’s journey to wellness. “I remember talking to one of the managers at The Inn and we were talking about having to wear masks,” she recalled. “I felt like it was normal for me. I’ve been doing it since I was 15 years old. Not being able to see many friends or family was how I spent the first years of this journey anyway. It was a bit challenging, but I got used to it.”

Back in El Salvador, Alison lives primarily with her family, where she spends her time playing video games or playing with her dog, Apolo. “He’s the first dog I’ve ever had,” she said. “I’m learning things; for example, don’t give them chicken when they’re puppies. I love my dog.”

She still takes comfort in nature, though she is not – and never was – much of a camper. But she will sometimes sleep in the backyard, and looks back on a pair of hikes through the forest as a milestone in her recuperation.

“I like to go to forests just walking, just long walks with people,” she said. “I’ve done it twice and it was a pretty big deal to me. We did six kilometers and we had to walk uphill.”

A soccer player before her initial diagnosis, Alison has also begun regaining some of the strength that abandoned her during her toughest days. “I can go to the gym now,” she smiled. “Not every day, I don’t do too much, but I go to the gym. I think that says it all about how I am right now.” 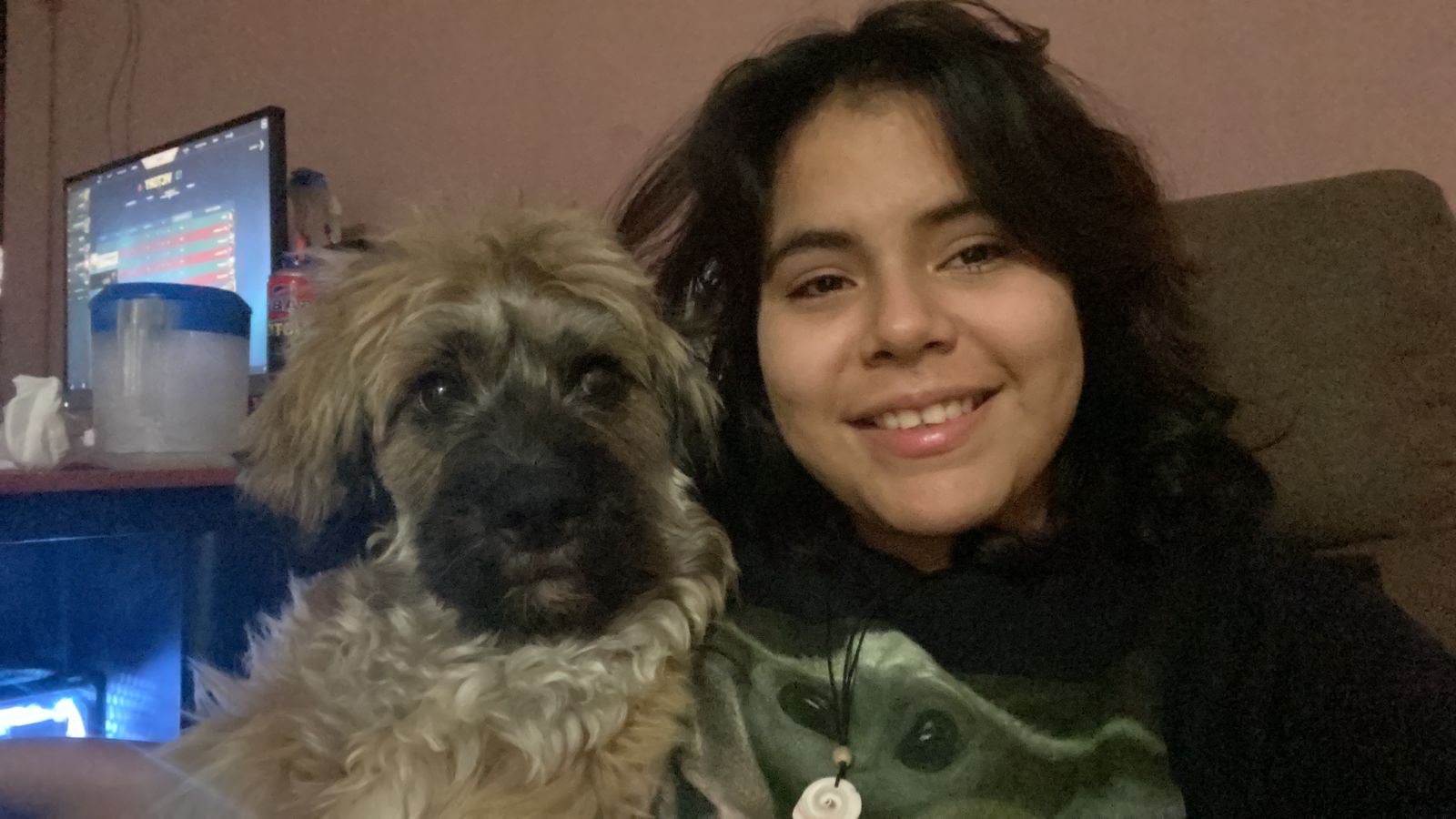 Alison with her dog, Apolo

Indeed, Alison is doing well. She has done well enough that she has not had to return to Bethesda since leaving in the early days of the pandemic, though she will eventually return for annual check-ups.

“I miss everyone there,” she said of The Inn. “From friends to the people that work at The Children’s Inn, I miss them so much. I want to tell them to keep their hopes up. Just look at me now. My hair is growing. I’m so much better, and it’s all thanks to the people at The Inn. You helped me in ways that I couldn’t even put into words. Just thank you for that. You’re always going to be in my heart.”