“Maybe the NIH can help!”

Hayden loves watching football (well, actually, the cheerleaders), eating boiled peanuts, and seeing the South Carolina Stingrays play hockey. He’s an adorable, funny child— “the family comic,” according to his mother Shawna— and he has quite the dance groove: Gangnam Style, in particular. 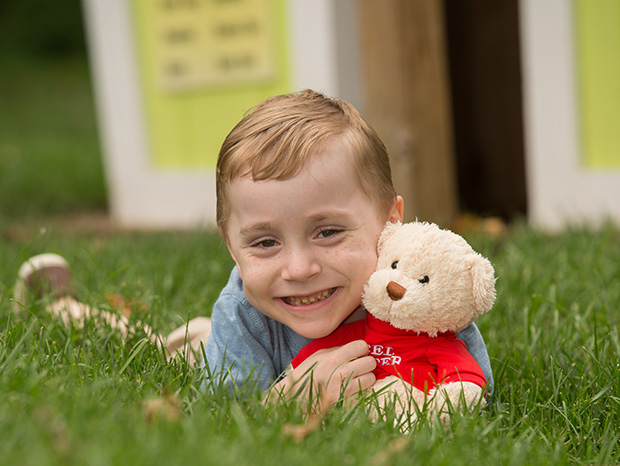 Meeting 5-year-old Hayden, though, you’d never know he is one of only two people worldwide to have a disease that is so rare it doesn’t have a name. His condition results from a mutated, or misspelled, gene, “LYN,” which is supposed to police the activity of Hayden’s immune cells. Instead, that policing is out of whack and his body constantly attacks itself. The result is ongoing inflammation, frequent infections, skin issues, and chronic liver disease. He’s often very tired yet he doesn’t let it show.

Hayden has been this way since birth. As with many rare conditions, a series of misdiagnoses made the search for answers tough. Cytomegalovirus infection? A penicillin allergy? The family received these and many other guesses from doctors who desperately wanted to help but had no idea what was going on.

Then Hayden’s great-uncle saw a special on TV’s 60 Minutes about the NIH’s Undiagnosed Diseases Program. Maybe, Shawna thought, the NIH could help. Although that particular program was not a fit for Hayden, a visit to the NIH led to answers. “We evaluated Hayden in the NIH autoinflammatory disease clinic where we use a personalized plan to diagnose and treat children with early-onset inflammatory conditions,” says Dr. Raphaela Goldbach-Mansky, who oversees Hayden’s care.

Her team did tests and collected blood and tissue samples. They did the same for his two older brothers and parents—all healthy. The goal: to find gene differences that could give clues to help “solve” Hayden’s mysterious condition. After an agonizing year of searching, the scientists found what they were looking for – a misspelled LYN gene not present in his parents or healthy siblings.

As it turns out, an experimental drug blocking LYN function was already being tried to treat leukemia patients. In collaboration with NIH oncology doctors, Hayden was started on the twice-daily pill. The results have been mixed, providing relief for a time and leading to reversal of his liver condition, but Hayden’s doctors are considering other options for the long term, including a bone marrow or stem cell transplant. Both of his brothers are perfect matches for a transplant.

“I don’t know what we’d do without it,” says Shawna of The Children’s Inn, where they stay during medical treatments. “The Inn staff and volunteers really make it the special place it is,” she says, adding that Hayden cannot contain his excitement when it’s time to come back to The Inn. “How many more ‘sleeps’ before we go?” he asks his mom, with happy anticipation. 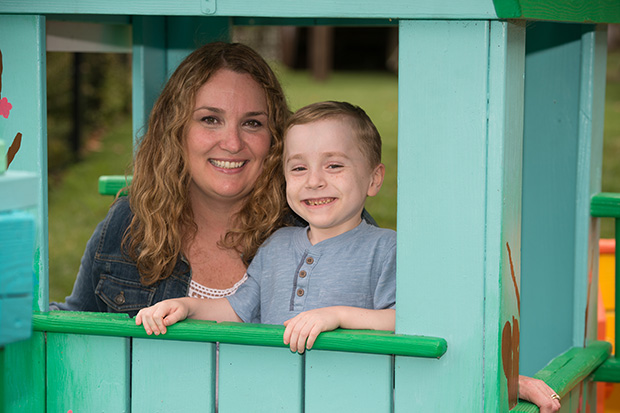 No child enjoys medical pokes and prods and passing the time in hospital hallways for hours on end, but Hayden’s NIH medical family finds many ways to ease his anxiety and pain, and, as mom describes, “for him to be the best version of himself.” “Monsignor Lollipop,” who magically extracts sweet treats from his ear, greets Hayden after painful blood draws. In the Clinical Center playroom, Hayden re-connects with his guinea pig friends who he got to name himself: Swirl and Twirl.

At The Inn, Hayden adores frolicking with Zilly, the therapy dog, playing Bingo, and singing silly songs with Chaplain Mike on Tuesdays. According to Shawna, these fun and calming distractions pad the long, hard days and help to lessen uncertainty about Hayden’s future. “We are so grateful for The Children’s Inn and Hayden’s NIH team: He loves each and every person there.”