After a routine check-up at the doctor, Michelle learned that her five-year-old daughter, Sophia, had a dangerously low red blood cell count. Not certain about a diagnosis, she was told to quickly pack her bags and head to the hospital. 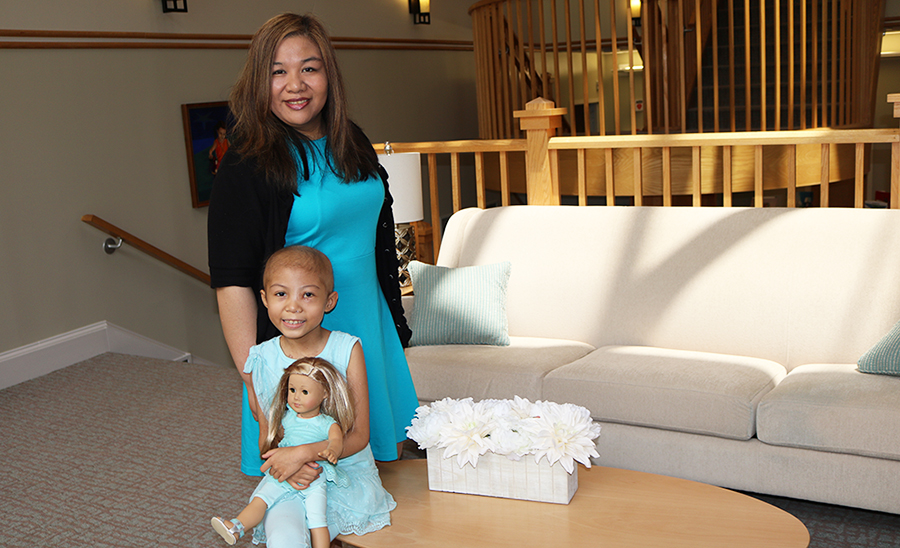 Several tests revealed that Sophia had severe aplastic anemia, a rare and serious blood disorder in which the body’s bone marrow doesn’t make enough new blood cells. Sophia had the worst kind of aplastic anemia, rendering her completely dependent on transfusions to survive, with no immune system to protect her from infections.

Michelle spent months trying to find a match for Sophia to receive a blood and marrow stem cell transplant. Unable to find a relative or unrelated donor who was a tissue match, Sophia and Michelle traveled from their home in Chicago to the National Institutes of Health (NIH) to participate in an experimental protocol. She was treated using a combination of two stem cell sources; mis-matched umbilical cord blood stem cells combined with mis-matched stem cells from her mother.

“Historically, patients like Sophia would be left with no good therapeutic options, and most of them would ultimately die,” says Dr. Richard Childs, Sophia’s NIH physician. “Aplastic anemia treatment has advanced greatly over the past 10 years. New drug and transplant-based therapies developed by doctors at the National Heart, Lung, and Blood Institute (NHLBI) are now effective in treating the disease in the vast majority of patients. Most remarkably, patients who historically have had the worst survival, namely those who have failed medical therapy that lack a tissue matched stem cell donor, now have hope there disease can be cured using mismatched transplants, which are now much safer.”

“At the NHLBI, the ongoing cord/haplo study has survival rates greater than 90%, which is really amazing when you consider that less than 5 years ago, mortality rates with cord or haplo-transplants for aplastic anemia had mortality rates as high as 50%.”

As a single mom who had to leave her job to take care of her seriously ill child, Michelle still maintains a positive outlook. “It’s been challenging to pick-up and leave our life in Chicago, but faith keeps me going,” she says. The two have stayed at The Children’s Inn for nine months now. “I had to let go of my natural urge to be in control. You cannot plan when your child has a rare disease.”

Sophia, now seven, enjoys all of the friends she has made at The Inn, playing with Zilly the therapy dog, and going on fun field trips. “The Inn is our home and the staff has become like family,” says Michelle. “We wouldn’t be here if it weren’t for The Inn.”