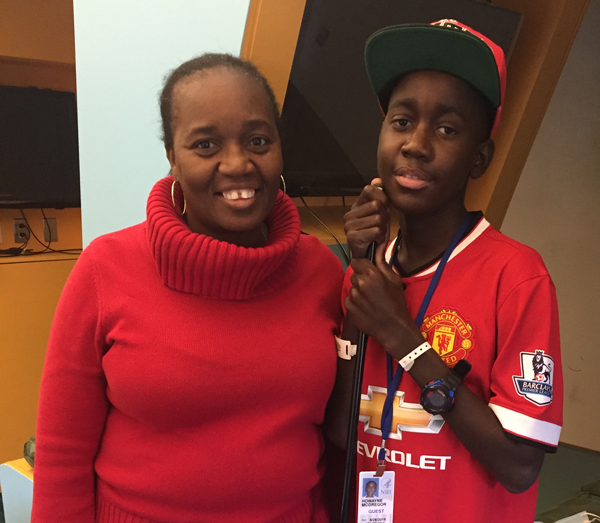 Sixteen-year old Howayne McGregor, from Jamaica, suddenly collapsed on his routine walk to school and was rushed to the nearest hospital. Doctors spent 10 weeks trying to determine a diagnosis.

Howayne, and his Aunt Michelle, who is his legal guardian, were understandably worried and looking for answers. After sending his lab results to Dr. Neal Young at the National Institutes of Health (NIH), Howayne received the diagnosis of aplastic anemia, a rare but serious blood disorder in which the body’s bone marrow doesn’t make enough new blood cells.

Wanting the best care for Howayne, Michelle and Dr. Neal Young decided he should participate in a research study at the NIH. Dr. Young and his team at the National Heart, Lung, and Blood Institute (NHLBI) are the worlds leading experts in aplastic anemia, and assured Michelle of their ability to help Howayne beat this disease.

Howayne recalled his travel to the United States, “I was too sick to really take in what was going on. In order for me to get here, I had to receive eight bags of platelets and nine bags of blood,” he says. To put this into perspective, the average human body holds 10 pints of blood, Howayne had to have 90% of his blood replaced for the trip to the NIH.

When Michelle arrived at The Children’s Inn she said she felt an enormous relief and sense of community. She knew she wasn’t alone anymore. “The Children’s Inn is far ahead of what we have for families in Jamaica. It is a blessing,” she says.

Treatments for aplastic anemia can include blood transfusions, blood and marrow stem cell transplants, and medicines, and can take several months. Howayne is currently undergoing treatment at the NIH, and he and his aunt are expected to stay at The Inn for 10 months.

Back home, in Jamaica, Howayne doesn’t have many opportunities to play with gaming systems or computers, so it’s no surprise that the Game Room and Computer Room are his favorite areas of The Inn. Aside from playing an unlimited number of video games, he likes staying at The Children’s Inn because he can enjoy just being a kid and doesn’t have to be alone during this difficult time.