Cars, cars, and more cars. Racing, NASCAR, tires, and pit crews. That’s what nine-year-old Travis thinks about. Pretty much all the time.

The gregarious, energetic child is “all boy,” you could say, in seemingly non-stop motion as he rattles off all his favorite things to do: Sled hockey, wheelchair basketball and tennis, adaptive skiing, Wii sports. And race cars: Although he’s years away from driving, he’d like to one day be a pit crew chief.

“So I can boss people around!” he declares.

From Travis’ appearance and attitude, you’d never believe that inside his body, many things are wrong. His legs are different lengths, his bones are prone to breaking, and he has a long, “deep” tumor running from his lower spine down across his hip to below his knee. He also has lower back pain from constant irritation to the nerves in his spine.

There are some visible signs, such as “café au lait” brownish spots on Travis’ skin. He also wears special shoes, uses a cane, and has a leg brace (custom-made of carbon fiber, with imprinted sports-car imagery, of course).

Travis has neurofibromatosis type 1, or NF1, one of the most common genetic disorders. Although he was diagnosed at 6 months, NF1 is a progressive condition and it’s taken many years to understand the full extent of its effects.

His parents, Kelly and Scott, both meteorologists living and working in Cheyenne, Wyoming at the time, shuttled him to various doctors after they noticed unusual growth issues when he was an infant, such as uneven legs and many birth marks across his body.

Ultimately Travis’ parents decided to move the family – including two older brothers Nolan and Barrett — to Salt Lake City, Utah, where he could get optimal care for his condition. After participating in a clinical trial that did not halt his tumor growth or otherwise improve his health, they connected with NIH doctors conducting research on NF1 treatments. Kelly can now only work part-time to keep up with his demanding health care needs.

Every few months for the past two years, Travis and his mom board a plane from Salt Lake to Bethesda, where he gets poked, prodded, measured, and evaluated with various sophisticated medical tests.

Travis and his mom stay at The Children’s Inn while they’re at the NIH for his tests and treatments. He is participating in a clinical trial testing whether a drug used for cancer can shrink his non-cancerous tumors and other symptoms. Since November 2015, he’s been taking two pills every day.

While it’s too soon to know the long-term outcome, already Travis’ tumor has shrunk dramatically in size (by 25 percent) – to the extent that his pants are so loose he is constantly pulling them up. The back pain has disappeared. And, his hair turned blonde: an unexpected side effect that Travis uses to his advantage to acquire “tons of girlfriends,” according to him. 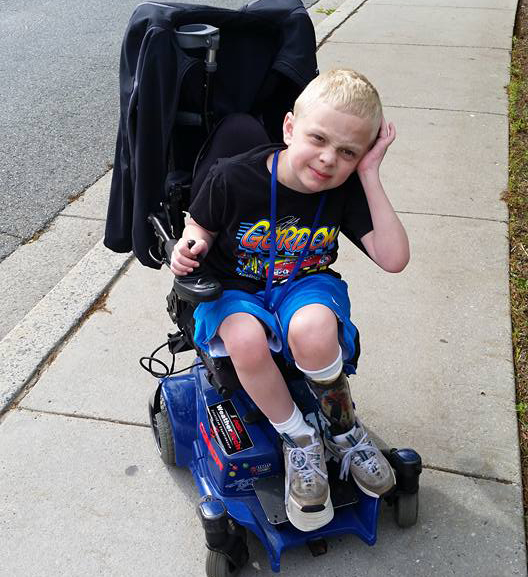 On their frequent cross-country trips, Travis’ mom Kelly looks forward to the solace and family atmosphere offered by The Inn. She’s become an avid fan of Georgetown Cupcake, who routinely supplies treats for residents and their families. She and Travis enjoy talking to other children and family members who instantly find common ground.

“It doesn’t matter what they’re battling,” Kelly says, “we all understand each other. It’s truly a home.”

And what is Travis’ favorite thing to do at The Inn?

“The playroom!” he exclaims, quickly describing in great detail the car mat where he can play racing games. He also enjoys “cooking” in the play kitchen followed by impromptu picnics in the indoor tree house.

Having had 26 MRI scans, three broken legs, several surgeries, and a gazillion blood draws and other medical tests, Travis is an extraordinary child who seems to easily bounce back into being ordinary.

He’s managed to convince the world that he’s no different from any other kid. And does anyone look at him or treat him differently because he has NF1?